THE FUNERAL OF GENERAL ALEXANDER HAMILTON 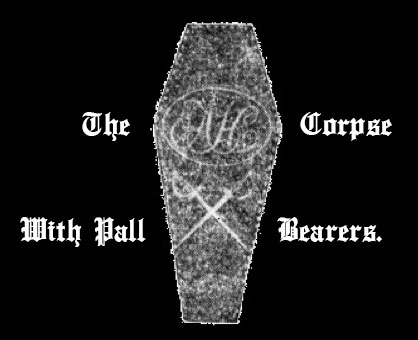 “THE CORPSE WITH PALL BEARERS”

With the usual arrogance of sociopaths, Aaron Burr did not accurately foresee the consequences of his actions.  He grossly underestimated Alexander Hamilton’s popularity when he shot and killed him over an imaginary insult.  Burr thought that if he strictly observed the rules of code duello, he would be blameless.

The shock and outpouring of grief at Hamilton’s death consumed Manhattan for days.  Newspapers ran accounts of the duel, printed the letters exchanged, and described how Burr’s heart was filled with “coals raked from the fires of hell.”  The papers showered pity on Hamilton’s widow and fatherless children and printed the procession of the funeral parade in detail.

Hamilton died in the home of his friend William Bayard, a wealthy merchant who lived on Greenwich Street along the Hudson River.  It was to Bayard’s home that Hamilton was rowed immediately after the duel to receive medical care.  And it was there that Hamilton said heart-wrenching farewells to his wife and seven children, and received Holy Communion and the last rites from Bishop Benjamin Moore of Trinity Church.

Hamilton died peacefully on Thursday, July 12, 1804 at about 2 p.m.  The funeral was to be held Saturday.  Embalming was not yet used in America, so bodies putrefied soon after death, particularly in hot July weather.  Immediately after death, Hamilton’s body was carried to the home of his brother-in-law, John Barker Church to prepare it for burial.

While Burr sat stewing in his dilapidated mansion, Richmond Hill, Manhattan reeled at the loss of Alexander Hamilton.  Flags everywhere in town and on the vessels in the harbor flew at half-mast.  Church bells were muffled and only allowed to toll ponderously at designated intervals.  Within twenty-four hours, praise and gratitude for Hamilton’s lifelong service to the nation and to New York mobilized city leaders and clubs and fraternal organizations who sprang into action.

Every civic group in New York sought to pay tribute to the great man whose concepts of federalism and dual sovereignty knit thirteen separate colonies into a unified nation.  They endeavored to honor Hamilton as the moving force behind policies that quickly nurtured America’s prosperity upon its freedom from England.  And they saw the fruition of Hamilton’s economic policy firsthand: New York Harbor was the busiest in the nation.

Men who wished to demonstrate mourning for Hamilton pledged to wear black armbands for a month.  Institutions and civic groups universally clamored to march in the funeral procession.  Even Burr’s Tammany Society, whose members shot both Hamilton and his son, inserted itself into the order of march for the parade.

Soldiers and artillery mustered at 9 a.m. on Saturday, July 14 in a park outside Church’s house. The New York Independent Volunteers were ordered to assemble at the Battery to commemorate General Hamilton with various gun salutes.  Although the funeral procession was scheduled to depart at 10 a.m., it did not move out until noon.  The General’s hat and sword were placed on top of his coffin.  His grey horse was draped in black and led by two servants dressed in white, with white turbans trimmed with black.

The groups that marched in Hamilton’s funeral procession included students of Columbia University, Hamilton’s alma mater, the General Society of Merchants and Tradesmen, gentlemen of the bar and all law students, the St. Andrews Society, the Society of Cincinnatus, clergy of all denominations, physicians, justices of the supreme court, ministers, ambassadors, consuls and residents of foreign nations, the governor and lieutenant governor, the mayor and the city council, officers of the various banks, and officers of all vessels then in the harbor.  A coach carried Gouverneur Morris and four of Hamilton’s five sons.

From Church’s house on Robinson Street, the procession marched down Broadway to Beekman Street, then over Pearl Street to Wall Street where the column ascended the slight hill to Trinity Church.  Hamilton’s old friend, peg-legged Gouverneur Morris, flanked by Hamilton’s four sons, delivered a eulogy from the portico of Trinity Church as the bier and Hamilton casket stood before him.   He concluded with:

“Oh, my fellow citizens!  Remember this solemn testimonial that he was not ambitious, yet he was charged with ambition.  And wounded by the imputation, when he laid down his command, he declared in the proud independence of his soul, that he never would accept any office, unless in a foreign war he should be called on to expose his life in defense of his country.  This determination was immoveable. It was his fault that his opinions and his resolutions could not be changed.”

Here Morris was referencing charges levelled by Hamilton’s political opponents, including George Eacker who shot Hamilton’s son Philip, that he would use his general’s rank and loyal connections to stage a military coup.  Hamilton had long been charged with being a monarchist.  His enemies claimed he wanted to elevate himself as king.  As Morris observed, he refuted the nasty charge of ambition by promising never to re-enter the military unless the nation was threatened by a foreign power.  Morris continued:

“Knowing his own firm purpose, he was indignant at the charge that he sought for place or power. He was ambitious only of glory, but he was deeply solicitous for you.  For himself he feared nothing, but he feared that bad men might by false professions acquire your confidence and abuse it to your ruin.”  This was Morris pointing to Burr, who had sought the governor’s office to help dismantle the union.

Soon after Morris’s stirring words, Bishop Moore performed the graveside service, “Remember, man, thou are dust, and unto dust thou shall return.” And the body of Alexander Hamilton was committed to the earth of Trinity churchyard near the unmarked grave of his son Philip who died in an identical duel two years before, protecting his father’s honor.  The large, ornate marble marker still stands guard over their remains. 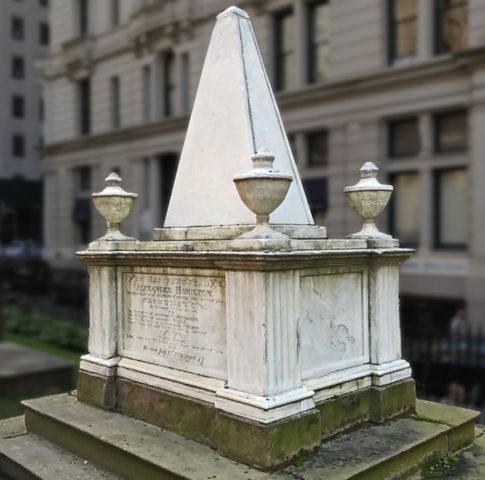