On two occasions Cincinnatus left his farm to protect his beloved Rome.  Each time, the Roman Senate sent emissaries to his farm to call him away from his plow, dress him in the robes of office and vest him with dictatorial powers. In 458 and again in 439 BCE, General Cincinnatus crushed Rome’s enemies in a matter of weeks and saved the Republic, but when the Senate invited him to rule Rome, he declined power and returned to his plow.  This ability to put public service above personal gain echoed down the centuries as a model of good citizenship.

As the American Revolution was ending, Henry Knox and Alexander Hamilton met at Freidrich von Steuben’s headquarters in Fishkill, New York to discuss how to keep the spirit of the revolution alive.  Officers were relinquishing their commands and returning to civilian life, but they needed a reminder of their zeal and sacrifice in throwing off the yoke of British domination.

Hamilton addressed this group, eloquent as always, and proposed a hereditary society with insignias and rituals that would meet at least once each year.  Membership would pass down father-to-son according to the law of primogeniture, a throwback to the passing of lands and titles in feudal England.

The officers at this meeting, May 13, 1783, founded the Society of Cincinnatus in order to “preserve the rights so dearly won; to promote the continuing union of the states; and to assist members in need, their widows, and their orphans.”  Membership was limited to officers who had served at least three years in the Continental Army or Navy, officers in service at the end of the war, or the eldest sons of deceased officers.

Of about 5,500 men originally eligible for membership, 2,150 immediately joined, and subsidiary chapters opened in all thirteen states.  King Louis XVI chartered a French Society of Cincinnatus on July 4, 1784, to commemorate the assistance Lafayette and French naval and ground troops lent to the patriots.  Independence Day, the Fourth of July, became the sacred holiday of the society, and on that day each year the Cincinnatus Society convened to fraternize, recall heroic deeds of yore and “network” with other leaders of business and the professions.

However, the society was criticized by many as elitist.  There was resistance and even outrage when its creation was announced.  How could any American seek to create an aristocracy in this new democracy in order to keep power and privilege in the hands of an elite?  Surely this attitude would soon become as oppressive as British rule.

Long before the Revolution another far more democratic fraternity had been formed in 1765, the Sons of Liberty.  Sons of Liberty clubs sprang up in Boston and New York to protest British taxation and these clubs erected “Liberty Poles.”  The clubs continued through the Revolution as secret societies, fighting the British with demonstrations, espionage, and combat.  The Sons of Liberty came from the working class: blacksmiths, coopers, wainwrights, bricklayers and carpenters.

The year after the Cincinnatus Society was founded, the Sons of Liberty campaigned and won a majority of seats in the New York Assembly with a goal of passing laws to confiscate all Loyalists’ property.  Alexander Hamilton, by now the top attorney in New York, sprang to the defense of lingering British subjects to help them keep their homes and businesses, causing more resentment.  Hamilton and his federalists were also disliked for supporting restrictions on the common man’s ability to vote, as well as their control of the banks which was seen by some as a way to keep wealth and power for themselves.

In contrast, Aaron Burr, perhaps America’s first Progressive or “limousine liberal,” ignored his blue-blood pedigree, and cast himself as the champion of the common man. To combat Hamilton’s elitists, he adopted a quirky little drinking club, the Tammany Society, which used faux-Native American rituals and met in a “wigwam” at Brom Martling’s tavern.  Burr forged these “nobody” workingmen into the nation’s first political “machine.”  With wit, charm, pretty barmaids and lots of wine and grog, Burr recruited these roughcast men and then infused them with purpose and ambition.  He taught them how to canvass and groom voters and how to get their votes.  And these men produced for him.

Burr used his Tammany club to win the State Legislature in 1800, and that gave him control of the state’s electoral votes, which were critical in any presidential campaign.  Burr pledged these “swing” electoral votes to Jefferson in return for a place on the ticket.  But when the vote was tied in the House and Burr refused to accept second place, Burr incurred Jefferson’s unforgiving wrath.  In retaliation, Jefferson dumped Burr as the Vice Presidential candidate during his re-election campaign of 1804.

Feeling his chances for power diminishing, Burr set his sights on the New York governor’s office in order to regroup and try again for the presidency.  To help in his quest, Burr finally wrote Hamilton in the fall of 1803, seeking membership in the Cincinnatus Society.  Having served admirably at the Battle of Quebec, and finally at Valley Forge, Burr qualified for membership.  He’d never applied before because he considered the wealthy merchants and attorneys stuffy and pompous.  He preferred his Tammany boys.

The national Cincinnatus society held its annual Fourth of July banquet in Fraunces Tavern at the southern tip of Manhattan, where Burr attended his first meeting on July 4, 1804.  At that time, he had already scheduled his duel with Hamilton for a week later, July 11, at Weehawken, New Jersey.

That night, Hamilton was the highest-ranking officer in the room.  He had served for six months as commander of United States Army after Washington’s death in 1799.  On this night he wore his colorful military uniform, a blue coatee with brass buttons, white buck trousers and black riding boots with a sword hanging from his maroon sash. Burr dressed in black civilian clothes.

With Hamilton preening in his old uniform, many toasts were offered by the boasting, prosperous men.   Aaron Burr sulked in the back of the room and watched Hamilton chat and laugh with his wealthy friends and clients.  At one point, encouraged by the attendees, Hamilton leapt upon a table, brandished his sword on high, and sang a rousing tune from his soldiering days, “How Stands the Glass Around.”

In view of the impending duel, Hamilton’s rash, devil-may-care attitude must have seemed incredible and possibly pathetic to Burr.  Hamilton was re-enacting the exciting days of derring-do when he often risked his life which must have seemed at best odd for a man approaching fifty who was a husband and a father of seven.  Perhaps this cocky self-assurance, and disdain for fear in the face of danger prompted Hamilton to accept Burr’s challenge.  But there was more.

Hamilton could not bring his eldest son Philip to the party this night because Philip had been killed in a duel by one of Burr’s minions two years before.  Despite his bravado, Hamilton must have felt his loss painfully this night as his fellow officers inducted their eldest sons into the society.  Apprehension at the approaching showdown with Burr must have also dampened his spirits.

Hamilton had helped to defeat Burr in the governor’s race, and he was back in command of the Federalist party.  Having rescued the Federalists from a misguided secession threat, Hamilton was at the height of his glory.   He had just completed a gracious new home in northern Manhattan and his family was healing finally after losing Philip.

Just like the noble Roman general, both men had returned to civilian life, but they could not give up the idea of combat.  At Burr’s initiation, they were going to duel.  The so-called “insult” was half-remembered dinner chitchat from months before, a charge that Hamilton uttered an opinion “even more despicable” about Burr, with no one ever learning what it was.  On the other side of the dispute, Hamilton had been challenged to duels before, but always talked his way out.  Why not this time?

Both men were at fault.  Burr had been disgraced by the election, but his demand for “satisfaction” seems trumped up and over-reaching.  Hamilton welcomed the challenge with a “bring it on” attitude.  He rashly ignored all consequences to his nation and to his family as well as to his own life.  A week later he stood on a ledge at Weehawken as Vice President Aaron Burr gunned him down.  Such can be the result of misplaced bravado.

Of course, war is sometimes necessary, and in two centuries our armed services have evolved admirably from humble beginnings as the Continental Army to establish America as a world power.  The Cincinnatus Society, reminiscent of knight errantry, continues today as an elite class of citizen warriors, an all-male association with sister chapters.  Today, the obsolete rules of primogeniture to fill the ranks of departed members, and ideals of such a society seem as outdated as dueling. 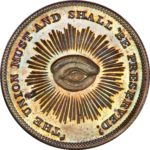